The feminists who want Armenians and Azerbaijanis to forgive each other

For too long, peacebuilding has been left to men, without any success, say activists on both sides of the conflict 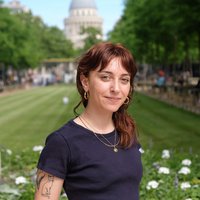 Peace negotiations between Armenia and Azerbaijan have been monopolised by men for more than 30 years. And they’ve repeatedly failed. Now, with the longtime adversaries expected to sign a peace deal by the end of the year, some feminists in the South Caucasus are taking peacebuilding efforts into their own hands.

Feminist peace not only calls for the end of wars and violence, but for the abolition of patriarchy, militarisation, nationalism, imperialism,and male dominance. For some feminists, it’s also important to establish a horizontal approach to leadership instead of a top-down one, meaning hierarchies don’t exist and decision-making is shared.

This may sound like a distant dream, considering both Armenia and Azerbaijan have highly patriarchal societies, but “we’re not saying that it’s a utopia that we’ll [suddenly] achieve one day. It’s a process,” explained Sevinj Samadzade. “That’s one thing people should understand when we talk about peace in general.”

Samadzade is a co-founder of the Feminist Peace Collective (FPC), an independent online platform created in response to the Second Karabakh War in 2020. The Azerbaijani-English website, which Azerbaijani researchers and activists contribute to, aims to introduce readers to feminist literature.

On 12 September, Azerbaijan attacked Armenia at the border, killing more than 100 Armenian soldiers. Two days after the military escalation, FPC published its own anti-war statement:

“The answer to the aggressive behaviour of the Azerbaijani authorities should come from the people of Azerbaijan: we cannot be in the same position in the war waged by the ruling class, which turns us, our resources, and our bodies into instruments!”

When the statement was published, Samadzade – who’s normally based in Baku, Azerbaijan’s capital, but is currently studying for a master’s degree in the UK – was visiting Tbilisi. The following day, she led a spontaneous three-person protest in the Georgian capital, with other Azerbaijanis against Azerbaijan’s attack on Armenia.

Although she was hoping for a larger turnout, Samadzade thinks the protest was important. “Even if it was just three people, it was to show that there are Azerbaijanis who are against Azerbaijan’s aggression against Armenia,” she said.

“Armenia doesn’t get as much attention as Ukraine,” Samadzade added. “That’s the point we wanted to raise in our own region of the South Caucasus; perhaps we should care about it when we talk about regional security [and peace].”

Samadzade is willing to risk demonstrating against Azerbaijani leader Ilham Aliev’s regime, despite the country’s history of imprisoning dissidents. Just this month, a pro-democracy activist was arrested for allegedly criticising the police on social media. Azerbaijani feminists are also often ridiculed online by men, while restrictive laws prevent non-governmental organisations (NGOs) from operating independently in the country.

Since the war, the mood among most feminists in Armenia has been sombre. Several former Armenian feminist peacebuilders refused to speak to openDemocracy for this story, mostly citing burnout.

“Some [feminists] refused to continue working on peace and security or feminism and security. They started kind of not believing in this anymore,” said Lida Minasyan, an Armenian feminist peace researcher.

But Minasyan isn’t giving up. “I thought, if my ten years [of activism] were for nothing and we failed, at least it taught me a lot of lessons that I can use right now,” she said. “Maybe it’s just the right time to act.” In 2020, also in response to the war, Minasyan co-founded the Women’s Agenda, an NGO that uplifts and empowers women in Armenia to engage in peace work.

More than 5,000 soldiers from both sides died two years ago after a bloody six-week face-off that resulted in Azerbaijan regaining control of Nagorno-Karabakh and the seven districts surrounding it, which Armenia had controlled since winning the first war in the 1990s.

Six months later, Azerbaijani forces were illegally stationed in Armenia’s southern Syunik region, and have remained there ever since. In recent weeks, a ceasefire agreed on 13 September has been violated every day for almost a fortnight, with both Armenia and Azerbaijan accusing each other of opening fire first. The European Union deployed a group of 40 civilian observers – who have so far made no comment on the violations – to monitor the Armenian side of the border.

“Speaking about peace in Armenia now is a bit challenging because you don’t know what kind of security challenges you might face,” Minasyan said. “It’s already been hard to talk about feminism, but when these two are combined, it gets even more sensitive.”

There are no legal protections for feminists and human rights defenders, who are “primarily targeted by non-state actors, which are often emboldened, encouraged and supported” by the semi-democratic government, according to a report by Human Rights House Foundation, an Oslo-based human rights organisation.

“We as individuals and organisations have received numerous attacks both in online and offline spaces,” Minasyan explained, adding that activists who reported attacks to the police received no response. “It's a patriarchal system.”

The Women’s Agenda is currently focused on engaging Armenian women – particularly those in regions bordering Azerbaijan, such as Syunik province – with peace negotiations at local, national and international levels. Although women make up 52.2% of Armenia’s population – which barely scrapes three million – their representation in high-level decision-making and emergency planning remains low.

Following the 2020 war, of the 91,000 people displaced from Nagorno-Karabakh, 88% were Armenian women, children and elderly people. Women’s livelihoods were disproportionately affected by the loss of land, housing and livestock caused by the war. Mothers and daughters also typically carry the burden of having to start over – such as finding new homes, incomes, schools and networks – as well as having to care and provide for their families.

“We cannot build feminist peace if women are not part of all these processes, and their needs are not even properly considered,” Minasyan said.

Perhaps the hardest obstacle to peace remains persuading Armenians and Azerbaijanis to speak to each other, let alone to forgive. Both sides remain bitter over the trauma and war atrocities they’ve inflicted on each other.

The lack of productive talks between the states after the 2020 war led some Armenians and Azerbaijanis to start their own online grassroots projects to encourage cross-border discussions. Most recently, on 18 September, more than 280 activists, scholars and writers – mostly Armenian and Azerbaijani – signed an anti-war statement, condemning Aliev’s attack on Armenia.

Armine (who requested openDemocracy not use her full name), an independent Armenian feminist peace researcher, believes communication and empathy should come independently from Armenians and Azerbaijanis, without the interference of a third-party actor such as the state or an NGO.

Armine started distinguishing her work as a feminist from ‘liberal peacebuilding’ about four or five years ago, when she became critical of what she described as “institutionalised, nationalistic-based approaches” to peace, which overlook the needs of people in border towns, as well as internally displaced people and women.

Armine sees the current triumphant mood among Azerbaijanis in response to the Second Karabakh War as similar to the attitudes of Armenians after the First Karabakh War. When Armenia ‘won’ the first war, displacing roughly 600,000 Azerbaijanis from Nagorno-Karabakh and surrounding territories, the Armenian attitude of triumph and victory lasted for almost two decades until 2020. “Now the situation is mirroring in Azerbaijan,” she said.

Armine questions this never-ending battle for victory and advocates for critical thinking between Armenians and Azerbaijanis to find ways to live together and co-exist again.

“It’s not about, ‘OK, this time you’re going to win. Then I’m going to win. And we’ll continue this war like a machine,” she said.

Not just a dream

Nailya* doesn’t consider herself a peacebuilder. She’s an Azerbaijani artist and filmmaker who grew up in Azerbaijan in the 1990s. For her, getting Armenians and Azerbaijanis to talk to each other is a reality she’s working to make happen.

“For me, it's not a dream, I understand that it's possible,” she said.

She credits this assurance in part to when she was ten years old and became friends with an Armenian girl abroad in Europe. They’re still friends to this day, 20 years later.

“When I was little, I felt the war,” she explained. “And I saw a girl from Armenia, and in no way was my brain saying, ‘no, you can’t trust her.' And the same goes for her.”

Nailya is currently visiting Tbilisi where she’s hoping to organise events and eventually an in-residence art space for Georgians, Armenians, and Azerbaijanis. She imagines it as a place of healing and creativity – mostly for young Armenians and Azerbaijanis wanting to leave their countries due to war and lack of opportunity. She envisions it to be a space for art, dance, performance, and sewing workshops.

“By using arts and healing methodologies, it allows [people] to go through the process of doing things so they can feel better,” Nailya said. “It’s learning to express yourself after censorship.” She has chosen Georgia because the location feels “practical” for Armenians and Azerbaijanis who face personal security risks when visiting each other’s countries.

Her artwork is also rooted in feminist and queer ideology and the non-hierarchal approach.

“I’m also fascinated by the idea of nationalism because it’s such a construct idea,” she said. “[Armenians and Azerbaijanis] are divided by cultural differences, such as language or religion. But there are so many things where we really are the same.

While her project has yet to be started, for now, she’s organising a social dinner with Georgian artists and activists to encourage healing and solidarity-building in the South Caucasus.

“For me, it’s not a dream of a peacebuilder,” Nailya said. “I approach it as an artist who believes that culture should be a bridging tool to open up the minds and thoughts of people to be more tolerant to each other and to heal.”