Goldsmiths strike: Why we’re fighting the marketisation of higher education

I teach at Goldsmiths, University of London, where University and College Union (UCU) members have now taken six weeks of strike action. We have done so in opposition to a recovery plan that could involve up to 46 redundancies – including academic staff and professional services staff – and the hollowing out of departmentally based administration.

Part of the action has coincided with national walkouts at dozens of universities in protest against massive pension cuts, entrenched casualisation, deteriorating working conditions and falling pay.

What’s happening at Goldsmiths isn’t without precedent. It is, however, both a dramatic illustration and the logical consequence of a series of developments around marketisation and financialisation in the higher education sector, which has been going on for more than a decade.

There has never really been a ‘golden age’ of universities. Higher education, in the past, was really accessed by only a small minority of people.

But at least up until 1998, there were no tuition fees in the UK. Living costs were supported by grants for all students. And the vast majority of campus services were provided in-house. This meant that the sector was, in the minds of the financial sector, ‘under-leveraged’.

In 2010, these voices got their way with the trebling of tuition fees and the construction of a rigged market inside higher education. The incentive for the government was that tuition fee loans, as opposed to grants, removed its spending on higher education, which would help reduce its deficit. This is a decision the Treasury has come to rue, which explains the recent proposal to deal with £140bn in unpaid loans.

But it was never about ‘mere’ economics. It was always about entrenching the market in all areas of higher education: about institutions becoming ‘service providers’ and about the commodification of the learning experience and the diversification of revenue streams. This involved monetising things such as student accommodation, with the entrance of giant companies like Greystar, Blackstone and Unite into an increasingly lucrative private housing market, and catering, where the likes of Compass and Sodexo replaced in-house catering at inflated prices.  By 2019, WonkHE, the higher education blog, could state the obvious: “Higher education is big business”.

This was accompanied by a move into the bond markets. Between 2013 and 2018, nearly £5bn worth of bonds were issued by universities, where there had previously been none. UCL (University College London) issued a £300m bond earlier last year, in partnership with NatWest, Barclays, HSBC and KPMG, as did Cardiff University, which added to its earlier bond with a further £100m issue. 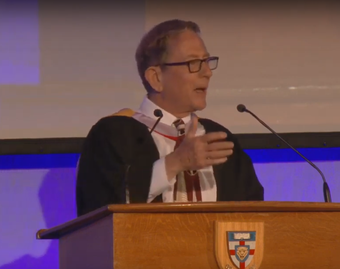 Higher education should be about love and justice
26 September 2019 | Anthony Barnett
An edited speech by openDemocracy co-founder Anthony Barnett to graduating Goldsmiths students, and accepting his honorary fellowship.

This rush to embrace marketisation explains the arrival of accounting firms, audit companies and banks to advise and oversee restructures. This is precisely what we are now seeing with the involvement of KPMG in the Goldsmiths recovery programme, and the subsequent participation of NatWest and Lloyds as the banks providing a small revolving credit facility in return for £60m of collateral, and International Monetary Fund-style obligations to cut spending, with serious implications for the future of both academic programmes and staff jobs.

What are accountancy companies such as KPMG actually doing in the higher education sector? Despite the company’s scandal-ridden reputation, KPMG was commissioned by Goldsmiths to draw up an independent business review that would apparently be required by any bank before it would consider financial support for the university. KPMG was then asked by Goldsmiths to do much more than this, including drawing up a new plan for centralised administration and quantifying the value of every single academic programme in the university.

Some critics of KPMG’s involvement have highlighted a potential conflict of interest, given that the deputy chair of Goldsmiths’ Council (and also the chair of its hugely important Finance and Resources Committee) worked at KPMG for 34 years, 19 of which were as a partner. She retired from KPMG in 2015 and joined Goldsmiths’ Council two years later.

Higher education is now a major area of growth for KPMG, best expressed in its 2020 report, ‘The Future of Higher Education in a Disruptive World’, which refers to ‘customer-centric strategies’. KPMG’s priority, however, is not to better educate students, but to win consultancy contracts to help universities drive down costs. At Goldsmiths, it has been paid a significant sum of money at a time when staff and students at the institution are constantly reminded about the awful deficit they’re facing.

KPMG’s argument is that what it describes as the ‘golden age’ of higher education is drawing to a close because of high participation rates and the devaluing of a university degree. Think of the logic here: something that should be a right for all citizens is now devalued because more people have access to it. That’s what happens when you treat education like a commodity and not a public good.

Citing research from the Institute for Fiscal Studies, the report suggests that 20% of degrees “are not worth the money in terms of future earnings; these students would have been financially better off if they had not gone to university”. KPMG’s conclusion is that universities have to drive down costs through more effective use of technology and, of course, staff cuts and efficiency savings. A different conclusion might be one based on the inherent societal value of increased participation rates. Indeed, if tuition fees are now such a disincentive to study, why not just scrap them, as Jeremy Corbyn and Bernie Sanders have proposed in recent years?

If tuition fees are now such a disincentive to study, why not just scrap them?

For KPMG, however, the problem isn’t about student participation per se, or about rising tuition fees or spiralling debt. It’s about falling productivity or, as the report puts it, that institutions are “running out of productivity gains under their current operating model”. This is its central concern: to advise institutions how best to increase productivity.

Interestingly, the KPMG report concludes that resistance is likely to come from those who present the most ‘risk’ to its vision of a more streamlined and efficient model of higher education. Universities have, according to KPMG, “reached the point where having more students in a class, reducing the number of small groups and limiting subject choice are meeting consumer resistance”. The report is referring here to people like the Goldsmiths UCU strikers and to those students who support them. But this isn’t really about ‘consumer resistance’ so much as the struggle by a range of stakeholders for a completely different vision of the university: one that privileges the innate value of a creative and critical education and that seeks to protect both jobs and students’ learning conditions.

“Disruption is on the way,” warns the KPMG report. Standing on the Goldsmiths picket line for many weeks now, that certainly feels the case. But let’s remember that it’s the prescriptions of management teams, like the one at Goldsmiths, and their financial advisers that are the really disruptive force, not the justified actions of staff and students in seeking to defend working conditions, academic programmes and indeed the real soul of a public educational institution.

A Goldsmiths spokesperson said the college needed to save £9m by 2023. “Under UCU’s latest pensions proposal,” he said, “we estimate that meeting wider UCU demands on pay and pensions would cost Goldsmiths at least an extra £7.2m per year on top of current staff costs of £90.4m per year, we simply cannot afford to meet these demands.”

“This process means that potential conflicts of interest can be robustly managed, including recusing individuals from decision-making where appropriate. Were there to be a breach of these processes the college would take appropriate action. College procurement processes involve all work above a specified value being put out to tender, with submissions reviewed and scored by a committee.”