Sunak likely unaware of decision to waive sanctions for Putin ally, says No.10

The government has denied Rishi Sunak as chancellor was aware of Treasury officials helping the head of a murderous Russian mercenary army to circumvent UK sanctions, raising questions over why ministers weren’t scrutinising such decisions.

openDemocracy revealed yesterday that the UK government had given licence for Yevgeny Prigozhin, the founder of the infamous Wagner army, to sidestep its own sanctions and launch a targeted legal attack on British journalist Eliot Higgins.

Today, Number 10 said there was “no political involvement” in the decision by the Office for Financial Sanctions (OFSI), a Treasury department, to waive Prigozhin’s restrictions.

The prime minister’s official spokesperson said he “wouldn’t have thought” Sunak, who was head of the Treasury at the time, would have been aware of the decision.

Asked about the point of sanctions that can be overridden without ministerial input, the spokesperson said: “I think it is for the courts to decide the appropriateness of any given legal challenge.

“What the OFSI do is take a decision on whether it is acceptable to allow an individual to accept money to pay for a legal cost. They don’t make a judgement on the legal case itself.”

The spokesperson would not comment on whether ministers should have been involved in the decision to let Prigozhin bring a case, which left Higgins tens of thousands of pounds in debt even after it was dropped in March 2022.

“The OFSI makes a judgement purely around cost – it’s for the courts to decide on the merits of the case individually,” said the spokesperson. 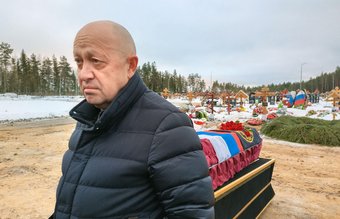 The government let a warlord sue our best journalist. Here’s why it matters
25 January 2023 | Oliver Bullough
OLIVER BULLOUGH: Yevgeny Prigozhin shows just how much the legal system favours the wealthy over the truth

James Cartlidge, exchequer secretary to the Treasury, told the Commons on Wednesday that decisions about giving sanctioned people licence to sue in the UK were taken “largely”, rather than entirely or always, by officials.

Asked earlier about the case by Clive Efford, the Labour MP for Eltham, during Prime Minister’s Questions, Sunak said he was “looking into it”.

“I’m proud of our record when it comes to sanctioning those people connected with the Putin regime,” the prime minister added.

Higgins, the editor of investigative website Bellingcat, said today the rules around the OFSI decisions “need some working on”.