Are circumstances now aligned for possible war in the Middle East?

With instability in Iran, a right-wing government in Israel and new Gulf alliances, the region may be ripe for war

On 1 November The Wall Street Journal reported on a Saudi intelligence assessment that Iran was preparing for a military attack. The motive, according to the assessment, was partly to divert attention from the widespread protests across Iran, some of the most intense and long-lasting in years.

The US and some Gulf states raised their military alert levels, but nothing came of the Saudi concern. However, it does raise the question of whether there is an increasing risk of a confrontation, stemming from the complex interrelationships in the region in the context of parallel political developments.

For example, in Washington, the Biden administration is still attempting to restore the nuclear deal with Iran that was ditched by Donald Trump four years ago, while Iran has been developing its missile capabilities and supplying Russia with armed drones. And Israel has elected a far-right Parliament that includes religious fundamentalists, who will have an influence on Israeli politics that has not been seen in decades.

As to the nuclear agreement itself, the Joint Comprehensive Plan of Action (JCPOA) was a multi-state deal made in 2015 during the Obama administration. It limited Iran’s ability to develop nuclear weapons in return for some sanctions relief and was considered a useful if incomplete deal. Then came Trump, who withdrew from it in May 2018, and also imposed further sanctions intended to make it difficult for a successor to reverse the process.

Since then, the Tehran regime has pursued a twin-track response of drawing closer to Russia, especially by supplying drones used in the current war in Ukraine, while eroding its previous commitments to the JCPOA almost to breaking point. These commitments revolved around the low level of uranium enrichment Iran was allowed to undertake and the amount of enriched uranium it could stockpile.

The International Atomic Energy Agency reported that two months ago Iran already had a stockpile of 55.6 kg of uranium enriched to the high level of 60% and was also increasing its enrichment capabilities so that further enrichment could produce enough weapons-grade uranium for a nuclear bomb within three to four weeks. The JCPOA deal was rooted in limiting that theoretical ‘breakout period’ to a year, so Iran has essentially bypassed that. But if it is accused of breaching the JCPOA, it can simply reply that Washington ditched the deal in the first place, not Tehran.

Having the weapons-grade material is not the same as producing a bomb, which might take months, but it does make it very difficult to restore the JCPOA, to the extent that the Biden administration may now be merely going through the motions in the continuing, if intermittent, JCPOA talks. 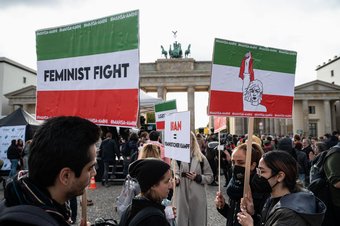 How I’m fighting for Iranian women from the outside
5 October 2022 | Lucy Martirosyan , Carla Abreu
Iranian women outside Iran have an important role in the protests against the regime, explains one activist

Instead, Washington is concentrating much more on supporting the internal human rights movements in Iran while trying to sanction Tehran’s oil exports.

Neither shows many prospects for success – the regime in Tehran is set on maintaining domestic control, often with considerable violence, while it benefits from high oil prices, caused mainly by the impact of the war in Ukraine. It is also testing new rockets, including a satellite launcher, to remind its own people and neighbouring states of its technological capabilities.

Then there are the Israeli election results, which have brought Itamar Ben-Gvir, the leader of the seriously far-right Jewish Power Party (JPP), to political prominence. The JPP is one of several religious fundamentalist parties, but it is the most significant and likely to be part of a new governing coalition, with many of its supporters confidently expecting its leader, Ben-Gvir, to be Israel’s next prime minister.

Benjamin Netanyahu will form the country’s next government, but given his legal problems, the idea that Ben-Gvir could be prime minister is not that far-fetched. In any case, almost any combination of leaders will produce a state decidedly more hawkish in its actions, making a long-threatened Israeli attack on Iran more likely.

If the current state of tension in the Gulf intensifies and war does break out, it will most likely focus on Israeli air and missile attacks intended to do as much damage as possible to Iran’s developing nuclear infrastructure, as quickly as possible.

With Israel’s new-found alliances with Saudi Arabia and the UAE, the view from Tehran would certainly be that these countries would be directly involved in a war. It follows that Western Gulf infrastructure, especially for oil and gas production and export, would be early targets.

If a conflict does evolve, then the UK will be involved at a very early stage

Due not least to the rise of the Israeli extreme right, the US under Biden might not provide initial military support for Israel, but a substantial Iranian attack on Saudi and UAE oil and gas would make US involvement in an anti-Iran war well-nigh certain.

That, in turn, raises the issue of the UK’s role. Over the past 12 years of Tory governments, the UK has substantially increased its forces ‘East of Suez’, including a naval base in Bahrain, substantial facilities at the new port at Duqm in Oman large enough to support Britain’s aircraft carriers, strike aircraft that have operated out of bases in Kuwait and Qatar, and a desert warfare training centre for the British Army has been opened in Oman.

There has been very little debate about this ‘Make Britain Great Again’ posture but it seems likely that every attempt would be made to thwart public debate should a conflict escalate, most likely made more effective by the new National Security Bill about to go to the House of Lords.

Another Gulf war is far from the minds of most Western politicians, with Ukraine dominating their security outlook, and any suggestion of an imminent conflict is dismissed.

But the uneasy combination of those parallel political developments is the reason the politicians may be mistaken. The Tehran regime is under very heavy pressure at home, with a strong probability that this will be sustained, so a foreign threat comes in handy as a major diversion, just as Israel elects a far-right government including extreme religious factions in positions of power that look in horror at Iran’s nuclear prospects.

In short, prepare for the unexpected and urge caution where possible. One thing is clear, though: if a conflict does evolve, then the UK will be involved at a very early stage – one more thing for Rishi Sunak and Keir Starmer to consider.