Western hypocrisy: What Joe Biden gets wrong about Russia

Vladimir Putin’s assault on Ukraine remains in a violent stalemate. Russian forces are pausing their attempts to occupy Kyiv, having withdrawn some of their forces from around the capital, but a major retreat is highly unlikely given Russia is recruiting several thousand mercenaries from Syria.

The Kremlin’s strategy now is to concentrate on overrunning the southern Ukraine port city of Mariupol, before joining up Russian forces in Crimea with those in Donbas to take control of as much of the region as possible.

This does not mean Putin intends to annex Donbas even if he can occupy it, since the economic costs for a weakened Russia economy would be considerable. He would instead support Donbas’s ‘independence’ and treat it as a client state, with the region’s reported shale gas reserves, coupled with the offshore gas reserves of Crimea, being satisfactory gains. If successful, this plan could, in time, undermine the Kyiv government and perhaps even achieve Russia’s original aim of installing a client government in Ukraine.

Meanwhile, global support for Ukraine remains strong but is very far from universal, with India, China and South Africa all studiously neutral. While many governments across the Global South supported the original UN resolution condemning Putin’s actions, plenty did not. And for many of those that did, the governments did not necessarily represent the views of their own people. While support for Putin may not be strong in the Global South, that does not translate into popular support for NATO, as openDemocracy’s Khatondi Soita Wepukhulu explained at the start of the war.

This mood was this week summarised in the opening line of an Al Jazeera analysis of world reaction: “The war in Ukraine has turned Russian President Vladimir Putin into a pariah – at least in the West.”

‘At least in the West’ is a theme that perplexes many people in the West. How is it that Russia can reduce cities to rubble – bombing hospitals, health centres and schools – and yet not face worldwide condemnation? It is a valid question and the answer is uncomfortable, but it must be faced if Russia’s actions are not to be repeated elsewhere. The answer, in short, is a widespread perception of Western hypocrisy.

A Western trail of death and destruction

Since 2010, the Watson Institute at Brown University in the US has been running the ‘Cost of War Project’, tracking and analysing the wars of the 21st century. In its recent study of the first two decades since 9/11, it reports that more than 929,000 people, including at least 387,000 civilians, have been killed by direct violence in US wars in Iraq, Afghanistan, Syria, Yemen and Pakistan. The institute believes that several times those numbers have died through indirect impacts, such as malnutrition, starvation, freezing to death and disease, which is hardly surprising given it reports 38 million people have been displaced.

Many of those wars – which were started and largely fought by the US and its coalition partners, notably Britain – ended in failure, including in Afghanistan, Iraq and Libya. In Iraq alone, the current count for civilian deaths since 2003 ranges from 186,143 to 209,349, depending on the methodology used. 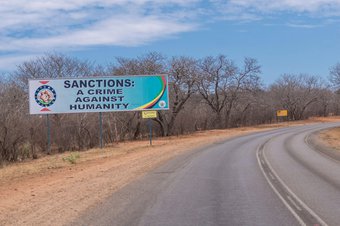 Some would argue that the West’s more recent war, its sustained air assault on ISIS in Iraq and Syria between 2014 and 2018, successfully destroyed the group. But even that ‘success’ is now looking tarnished, as ISIS survives and remains active in both countries and, along with other extreme paramilitaries, is entrenched across the Sahel, has a presence in Mozambique and the DRC, impacts on Kenya and Uganda, and has links with groups in Somalia.

Put bluntly, states such as the US and UK, which now expect global support for their stance on Ukraine, have, in the view of many around the world, two decades of blood on their hands.

With that in mind, when President Biden talks of the moral imperative of democracies challenging the Russian autocracy, it is all too likely to fall on deaf ears. People simply contrast the president’s stance on Putin’s regime with Western links to autocracies worldwide, not least in the Middle East and North Africa. In 1986, to take but one example, during a spat between the US and New Zealand over nuclear-armed US warships visiting local ports, the US ambassador in Wellington, career diplomat Paul Cleveland, was moved to comment: “Sometimes it is more difficult to deal with a messy democracy like New Zealand than with some Asian dictatorships.”

Even so, there is still the argument that Russia’s brutal tactics in Ukraine, of reducing towns and cities to little more than rubble, transcend anything done by Western coalitions in the Middle East and South Asia. The problem is that this does not stand up to scrutiny; quite aside from US violence in Vietnam or rendition and torture in Guantanamo, there are plenty of more direct examples, not least from Iraq.

Take just three. In April 2004, a US supplies column to a forward base in the Iraq city of Fallujah was ambushed and it took hours of battle and reinforcements for those involved to escape to safety. There were casualties but no deaths, yet that night the Marine Corps called in the devastatingly effective AC-130 gunships and levelled six blocks of the city, in what was openly described as a punitive action. There is no record of the number of civilian casualties in the densely packed city.

In November of the same year, the Fallujah ‘problem’ was finally solved when the US took control during an all-out assault on the entire city. Thousands were killed, most of the public buildings were razed, and more than half of all the houses in the city were destroyed or severally damaged.

For many, what Russia is doing is not so different from what has been done by US-led coalitions

And, in the US-led war against ISIS (2014-18), the most difficult task was the taking of a key ISIS stronghold of western Mosul in northern Iraq, especially the old city. The US eventually succeeded in this aim, following intense aerial and artillery bombardment, but the cost was the near-complete destruction of the city, again with many deaths.

The appalling Russian bombardment of Ukrainian towns and cities is broadcast to Western audiences thanks to near-24/7 coverage in the Western media. What is not realised by many of these audiences, is that this kind of coverage was also available, around the clock, during the Iraq War. Channels such as Al-Jazeera gave full accounts, including graphic images, of the injuries and deaths caused by Western forces, much of which was withheld on Western channels.

In short, there is rightly much anger across the West at what Putin’s forces have been doing and will continue to do in Ukraine. Many people living outside Western states are also appalled but, for them, what Russia is doing is not desperately different from what has been done by US-led coalitions in wars in South Asia, North Africa and especially the Middle East. If people are at a loss to understand why much of the world is not more forthright in its condemnation of Russia, that is where to look.