Staff and students in universities across the UK deserve better

Industrial action is a response to intolerable working conditions, and an attempt to make education a better experience for everyone

I’m both a student and a member of academic staff, so the announcement of a new round of action short of a strike by the University and College Union (UCU) has left me in a real predicament.

Cuts to pensions are the trigger for the ongoing industrial action, which has already taken the form of a series of strikes. But staff are also unhappy at being overworked, at ethnic and gender pay gaps, and at the growth of casualised, precarious employment.

As a student, I am constantly told I am a customer purchasing education and that as such, I have the freedom and power to make demands of my educational provider. I was part of the first group of students to experience the extreme increase in tuition fees, which rose from an average of £3,000 in 2011 to £9,000 a year later. The consumerist logic of education as a commodity can seem obvious: after all, the debt I have accrued to enable me to study will be mine to shoulder for years to come.

So why should I side with staff who, by striking and taking other forms of industrial action, are negatively affecting my education? This is the question often posed by those who oppose industrial action. Such a view presents staff as disruptive to the education students deserve, but this could not be further from the truth. The choice to strike is not one staff take lightly. Many exhaust themselves to ensure minimum student disruption, preparing extra resources and even engaging in ‘teach-outs’ – alternative lessons – on the picket line. The National Union For Students (NUS) supports striking staff.

For the NUS, the idea of student ‘freedom’ is dubious. Take, for example, educational outcomes – where the awarding gap sees Black, Asian and Minority Ethnic (BAME) students less likely on average to receive degrees of 2:1 and above, compared to their white counterparts, with Black students specifically at even greater disadvantage. These stark inequalities are part of what the UCU and NUS have described as the endemic and structural problems at the core of university education. Staff and students are systematically failed by politicians, policymakers and senior university leadership, with some in the latter group on salaries ten times that of some striking staff.

Universities often present a veneer of student freedom, choice, and agency. But the cost of this freedom is seldom borne by universities themselves. In fact, during the academic year 2020-21, as both staff and students struggled with the impact of the pandemic, members of the Russell Group, consisting of 24 of the UK’s top universities, collectively recorded a surplus of £2.2 billion in their annual finances. 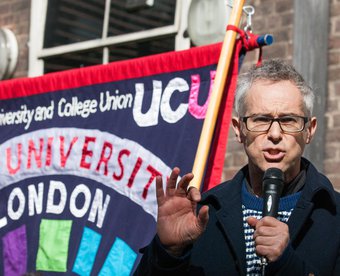 Meanwhile, for staff, there is an expectation of quick turnover of assessments, hands-on academic support, pastoral support, high-quality research, and tailor-made teaching content. Many staff love their work and love their students, but are sacrificing their wellbeing, livelihoods and family lives to ensure the university factory keeps running smoothly.

In the face of these crises, staff are again risking their income, job security and futures through industrial action. Choosing to take action in this manner means many of us will face cuts in our monthly income. However, we shoulder this financial burden in defence of education and to protect students, who we believe deserve the best academic experience. This can only be sustained if staff receive better pensions, pay and secure contracts – and with the eradication of the ethnic and gender pay gaps in the higher education sector.