In his new book, ‘Reconsidering Reparations,’ Táíwò maintains that the legacy of colonialism and slavery has led to the current crises of environmental collapse and racial injustice. To build a just world, the scale of the solution must match the problem. It must be global and prioritize saving the planet.

To build this just world, Táíwò sets out what he refers to as a “constructive” approach to reparations. He endorses a comprehensive program that includes – but is not limited to – unconditional cash transfers, global climate funding, torching tax havens, and the democratic control of local and international political and economic institutions.

Ahead of Earth Day on 22 April, I spoke with Táíwò about his emphasis on climate justice within a reparations program, the significance of democratic decision-making, and having revolutionary patience without complacency.

The conversation has been edited for clarity and length. It is part of ourEconomy’s series on the reparative economy.

Aaron White: How do you define global racial empire? What are the historical roots of our global economic system?

Olúfẹmi Táíwò: Global racial empire is my blanket description of what the world is like. We now have a planetary social and economic system because of the imperial conquests of European powers beginning in the 15th century, and arguably concluding – in the sense of starting up a planet-sized world system – towards the end of the 16th century. Those conquests literally built the world and the planet-sized social, economic and political system that we have.

AW: What is your argument for reparations? And for those unfamiliar with the reparations debate, how does it differ from other popular proposals in recent years?

OT: Reparations for transatlantic slavery and colonialism should be a constructive project. I call it the ‘constructive view’ of reparations.

Like many other events in history, transatlantic slavery and colonialism involved atrocities. What stands out about the particular atrocities of transatlantic slavery and colonialism is not just how bad they were, but also what they were. They were the events that literally constructed the planet-sized social system that we live in now. So I think reparations in response to global racial empire should have a scale of ambition to match. We should be trying to literally rebuild the world order in terms of justice this time – rather than injustice, racism, and other forms of bigotry and structural oppression.

This way of thinking about reparations is different from those about repairing relationships, or reconciliation. It's also different from views of reparations that I call ‘harm repair’ views, which is the idea that we should be trying to make the descendants of the worst affected, better off. That's absolutely something we should be trying to do and would be one of the central objectives of trying to create a new world.

If we don’t [act now on climate change], it’s hard to see how our descendants will get the rest of it done

AW: Your approach is explicitly global. So what significance do you give to national reparations proposals?

OT: I’m unambiguously in favor of national-level proposals. But the reason I insist on a global perspective is because the system that prevents success at any of those smaller scales is global. The people running this have never been confused about that.

In 1619, when enslaved Africans were rerouted from a ship that was heading to New Spain to head towards English colonies instead of Spanish ones – those people were arriving to a colony that was set up by investors an ocean away and regulated by an empire an ocean away. They were participating in a series of trade that had been set up in response to demand for silver in China. The banks financing all this were thousands of miles away from the shareholders profiting off of the colony, which was thousands of miles away from the actual colony.

AW: What is this process of world-making? And why do you think that reparations require climate justice?

OT: If you have this kind of ecological socio-system level view of what's going on in the world, and what we're trying to fix, then I think you're also looking at changing the world in that same kind of sense.

Where are the institutions? What are the structures, both physical and political, that are going to be compatible with the kind of world that we want to live in?

If you want to build a house, you would think about the foundation of the house; the materials; whether the ground can support its weight. You would think about the practical things that stand between you and accomplishing your objective. So the question for people who are on team racial justice is: is a world with huge climate-related disruptions to migration and movement, sea-level rise, natural disasters, balances of power between militaristic, great powers, a good or bad foundation for racial justice? I think it's clearly a bad one. Why climate justice must go beyond borders
20 January 2022 | Harsha Walia
The elite’s ‘solution’ to the climate crisis is to turn the displaced into exploitable migrant labour. We need a truly internationalist alternative

AW: In your book, you lay out some very clear targets and tactics for constructing this new world. These include challenging the institutions – such as the IMF and World Bank – propping up the current global economic and political system. How do you think these institutions should be held to account? And what role does democracy play in this agenda?

OT: What we want to avoid is the status quo. I think in a lot of cases, the thing to strive for is under the heading of ‘energy democracy’. People are focusing on energy production and distribution because of the role of emissions in this process, and that's a clear place to start. But I think this is an ethos we could carry out a lot more widely than that. The basic thing is: do we have democratic control or not? Do people get to decide the basic building blocks of how their lives are run? Or do shareholders, corporations and increasingly unaccountable algorithms get to decide that?

AW: Do you see debt cancellation as a way to distribute this power and wealth? How should we be approaching this imbalance of power?

OT: I have a by-any-means-necessary approach. Cash transfers, putting money in the Green Climate Fund or reallocating Special Drawing Rights at the IMF, or bilateral transfers of cash, sovereign debt cancellation, prevailing upon private creditors – all of that should be in the mix, whatever we can win. However you can, in a hopefully lasting way, move money, resources, and political power in the direction of people who don't have it, is good. And we should go for it. There's ways that everything I mentioned could go wrong – welcome to the human condition. We should at least go out swinging.

AW: So remaking the world, you argue, is a long-term process that you liken to the process of making soy sauce. Why do you use that comparison?

OT: I wanted an example of something mundane, but good. You want to tell me why soy sauce is great? Well, taste soy sauce. Delicious. It's a simple thing, but it's also a miraculous thing. To make soy sauce the traditional way is an intergenerational project. You brew soy sauce in barrels, the wood for that barrel comes from a particular tree whose lifespan is decades. The person who I talked about in the book is in a position to do this because his grandfather and a neighbor decided decades and decades ago to plant some trees. In building these barrels and brewing the soy sauce, he's making good on that ecological change, that environmental change, that action, that grandpa and his friend did many, many years ago.

All of us live and interact with a world that we didn't build, using resources that exist because of pathways that we didn't build. And all of us do things with those resources and pathways that are going to reverberate long after we’re gone. And if we reflect on that for a second, maybe that will keep us from thinking that the only way of succeeding and fighting for racial justice or fighting to change the world is to do some process that we personally see the end of.

It took the better part of a millennium to make the world into what it is now. If we can unmake that, and make a better world, in the span of the human lifespan, that would be dope, you should do it. But if we can't, it doesn't follow that there's nothing else to do. 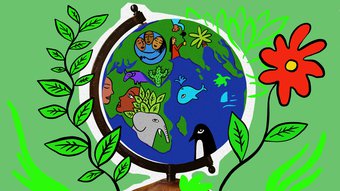 Maybe we can just make soy sauce. Maybe we can do something now that will be meaningful and make something possible later. That's plenty. Lots of cultures around the world have norms and traditions about this. It’s not just about you, your kids or the kids around you. But it's about the people who came before you and generations upon generations after you. I think if we think in that way, the scale of the thing that we're trying to accomplish won't scare us away from doing what we can in the time that we have.

AW: The main concern with that approach is the reality of climate change. How can we remain patient in the face of such an existentially urgent issue?

OT: The kind of patience that we should be cultivating isn't complacency. The timeframe of the climate crisis had better inspire us to urgency – because if we don't meet that challenge, it's hard to see how our descendants will get any of the rest of it done. As big of a challenge as the climate crisis is, remaking the entire planetary system of human social relations in the direction of justice is even bigger than that. It's quite a bit bigger.

There's a lot of scenarios in which global temperature rise stays below 2.5, or 2 or 1.5 degrees, but where there's still injustice. If we're really taking on this big project of racial justice and world-making – it's even bigger than answering the climate crisis. We should think about scale in terms of what our role is as ancestors. What world do we want to leave behind? And whatever practically we need to do to leave behind a good world, or at least the possibility of continuing the struggle for a good world is what we have to do. But we should be clear-eyed about what it is that we have to do.