The first glimmer of dawn was squinting over the horizon when Rita Piripkura and her family realised that strangers had appeared on their land.

At first, her father thought they were monkeys, but her grandmother understood what was going on. ‘White men’ had arrived in their remote forest in the north-west of the Brazilian state, Mato Grosso, ready to plunder Indigenous land.

Rita can still remember the sting of buzzing mosquitoes and strong winds on her face as she and her family escaped across the river in a canoe made of jatobá (Brazilian cherry) wood. Nine of her relatives were killed in the ensuing massacre, an event she has described in a video published last month by Survival International.

Since the massacre, which is believed to have taken place in the 1970s, only two other members of the Piripkura tribe have been spotted on their territory – Rita’s brother, Baita, and her nephew, Tamandua.

According to Fabrício Amorim, of the Observatory for the Human Rights of Uncontacted and Recently Contacted Indigenous Tribes (OPI), Rita is the only Piripkura person in regular contact with non-Indigenous people.

In the early 1980s, she was forced to work in slave-like conditions at a farm near the tribe’s territory. After being tipped off about her case, local authorities contacted Rita in 1984. A study conducted at the time by indigenist João Carlos de S. Lobato at the request of Brazil’s National Indian Foundation (FUNAI) estimated that Rita was aged between 18 and 23. It said that Rita, who spoke very little Portuguese, had spent at least 18 months on the farm.

The destruction of the Piripkura began with the Amazon rubber boom that lasted from the 1870s to 1910s and peaked again during the Second World War. ‘Rubber soldiers’ who had settled on the banks of the Branco and Roosevelt rivers clashed with Indigenous peoples trying to protect their lands.

The Indigenous locals managed to thwart the opening of roads to transport rubber, as well as the establishment of local bases near the rubber plantations, according to another report by Lobato. In retaliation, the workers destroyed villages and killed a great number of people.

Although the rubber trade is not as lucrative today as it once was, the situation remains dire for the Piripkura. The threat that continues to hang over Rita’s family is the result of clashes with invaders seeking to exploit the area’s natural resources. With the help of allies in Brazil’s government, the Piripkura have been able to withstand incursions into their land – but that support is waning under the leadership of President Jair Bolsonaro.

Sitting on the bank of the river she crossed all those years back on Piripkura Indigenous land, Rita described her fear that her last relatives might be killed. “There are lots of land-grabbers around,” she said. “They could kill them both. If they kill them, there won’t be anyone left.”

Of the lands that shelter Indigenous people, the Piripkura Indigenous Land was the most affected by illegal deforestation in 2020, when inspections retreated amid the COVID-19 pandemic restrictions, according to a report by the Observatory for the Human Rights of Isolated and Recent Contact Indigenous Peoples (Opi). The current protection that prevents exploitation of the Piripkura land is about to expire. If FUNAI fails to renew the order or restricts it to a smaller area, the fate of the Piripkura could be sealed.

The FUNAI group, co-opted by Bolsonaro, claims deforestation has decreased in the Amazon but agencies using satellite data report an increase of a third in one year alone

The demarcation of the Piripkura Indigenous Land has yet to be completed, explained Elias Bígio, the former head of the uncontacted peoples unit at FUNAI. However, in 2007, FUNAI approved a Land Protection Order, a legal instrument that temporarily prevents the exploitation of natural resources. This has been renewed every two to three years since. The protection expires on 18 September.

FUNAI, which has been increasingly weakened since Bolsonaro assumed the country’s presidency in January 2019, has until 17 September to decide whether to renew the order that restricts the use of the Indigenous land. In an email, a representative for FUNAI told openDemocracy that it was still carrying out studies to make the decision.

According to Sarah Shenker, of Survival International, the co-optation of FUNAI by Bolsonaro’s forces poses a threat to Indigenous rights, and this is increasingly evident. In June last year, FUNAI’s president, Marcelo Xavier, called the restrictions on lands that house uncontacted peoples excessive. “There are many inconsistent reports – areas with the presence of Indigenous peoples right on the edge of villages,” he said. “And many times, areas remain undeveloped for ten years with no expansion of studies, without any other sign [of the presence of uncontacted peoples].”

However, the National Institute for Space Research (INPE), a unit linked to the Ministry of Science, Technology and Innovation (MCTI), said that satellite data revealed a 34% increase in deforestation between August 2019 and July 2020. Similarly, the Institute for Man and the Environment (Imazon) recorded a 30% increase in deforestation compared to the previous year, which it called a ten-year record.

Given the imminent threats and FUNAI’s recent anti-Indigenous stances, a collective of Indigenous organisations launched the “Isolated or Decimated” campaign to press for renewal of the protection of the Piripkura Indigenous Land and four other uncontacted Indigenous lands that are under threat. The protective orders, which expire between this month and January next year, affect the territories of Jacareúba/Katawixi in Amazonas, Piriti in Roraima, and Ituna-Itatá in Pará.

According to the campaign, the Piripkura territory suffered the highest level of deforestation among all Indigenous lands that house uncontacted peoples in 2020, with a staggering 2,132 hectares cleared, the equivalent of more than 2,000 football fields. And the situation has worsened this year. In March alone, a territory of 518 hectares was destroyed. 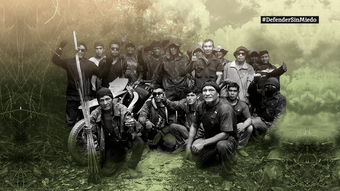 Amazon heroes who don't give up
16 September 2020 | Manuella Libardi
The Guardians of the Forest, a group of indigenous Guajajara in the Brazilian state of Maranhão, struggle to defend their land from invaders and to guarantee their survival in the midst of the COVID-19 pandemic.

A rise in the number of invasions by illegal loggers and miners in recent years has accelerated increasing the urgency of protecting this territory. Bígio said: “If, with the order in place, their situation is dire, imagine where they could be without it.” While others such as Amorim believe that FUNAI is likely to renew the orders, he concedes that it could drastically reduce the protected area.

In the mid-1980s, Lobato predicted that unless protection of the Piripkura land remained, the Indigenous group would be “doomed to disappear”, an extinction that would occur “due to omission or delay”.

Bolsonaro’s takeover of governmental agencies established to protect Brazil’s Indigenous peoples illustrates Lobato’s concerns, which now read like a self-fulfilling prophecy: “What we are sure of is that, without a doubt, [the history of the Piripkura] is a journey of bitterness and suffering and that if we do not act quickly [they] will no longer be able to tell us their story, as the wounds of extinction move inexorably toward them.”